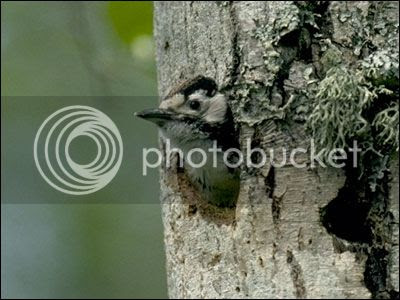 Juvenile White-backed Woodpeckers are sexually dimorphic whilst still in the nest. It takes around seven months (i.e. into the winter following fledging) for juveniles to attain full adult plumage. Juveniles are duller and browner than adults and black areas matt rather than glossy. White areas are greyer, dirtier than on adult and there is often a grey smudge over the ear-coverts and behind eye (similar to that on juvenile Syrian Woodpecker). The pink ventral region is smaller and paler than on adults and the dark streaks on the under-body are more diffuse. Both male and female juveniles have red on the crown (see other posts) but they are not as strong in colour as on adult males. The red crown is sometimes rather rusty and with grey or black flecks. Bare parts are grey. The photo here shows a fledging female at Varmland, Sweden, taken in May 1994 (Göran Ekström). Note that there is only a hint of pink on the forecrown on this bird.
Posted by Gerard Gorman: at 12:04