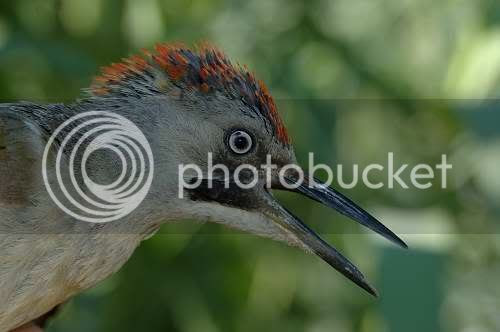 Subtle clinal differences in plumage exist between the various races of Green Woodpecker. The karelini race of central and southern Europe has duller green upper-parts than nominate and is overall duskier with yellow and green areas less bright. However, the Iberian race sharpei visibly separable being smaller with bill, wings and tail all shorter than other races. Measurements also differ within the population, birds being clinally larger in an eastward direction, hence those in Portugal are the smallest and those in eastern Spain the largest. Sharpei is more like karelini than the nominate race in terms of its dull tone of green upper-parts and in having greyish lores and ear-coverts. It also differs from the nominate in mainly lacking the black orbital area. Rather, the area around the eye, ear-coverts and supercilium are grey and only the lores black. In both sexes red crown also lacks black border. The red on the crown is paler than on nominate. Whitish spots on the primaries are fewer in number but larger than on other races. The outer tail feathers have less green, more black and the under-parts are unbarred, recalling Grey-headed Woodpecker. Though hsard to judge in the field, the billis also shorter than that of other races. Male and female sharpei differ in the same way as male and female of other race, i.e. male has red malar stripe bordered by black. The red in the malar stripe is lighter than in males of other races and bordered only at rear and on lower edge by black. Adult female sharpei has an all black malar stripe and a faint white line between the malar stripe and lores and ear-coverts. The lores are dusky not black. Both male and female juveniles of sharpei differ significantly from adults. Differences are similar to those in nominate, but are less marked and less patterned, especially on the under-parts, than juveniles of other races. There are however dark markings on the face and neck sides. The pale red malar stripe is bordered by black below and at the rear. Juvenile female sharpei is as juvenile male but lacks red in malar stripe. Photo above: Adult female sharpei, France (Georges Olioso & Jean-Marc Pons). Note the lack of the large back orbital area which other races show. Being "in the hand" this bird has raised its crown feathers in alarm.
Posted by Gerard Gorman: at 12:10