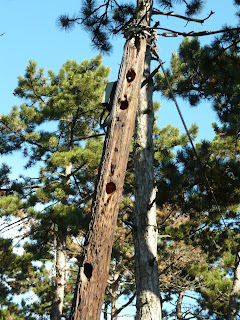 This photo shows a wooden telephone pole that woodpeckers have made holes in. Both Great Spotted Woodpecker Dendrocopos major and Syrian Woodpecker Dendrocopos syriacus are present in the park in northern Serbia where this photo was taken and both of these species could be responsible.
Posted by Gerard Gorman at 12:50 2 comments: 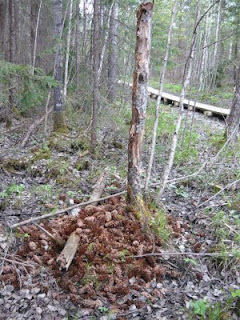 A pile of opened pine cones below the anvil, or workshop, of a Great Spotted Woodpecker Dendrocopos major. Favourite anvils are repeatedly used and thus piles of cones accumulate as they are tossed out after being opened and the seeds extracted. Forest near Tartu, Estonia, 2009.
Posted by Gerard Gorman at 19:08 No comments: 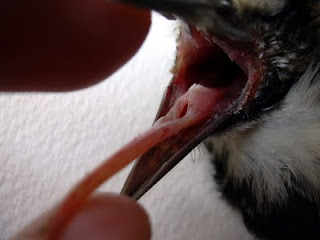 This photo of a juvenile Syrian Woodpecker Dendrocopos syriacus, found dead in Budapest, Hungary, was sent to me by Szabolcs Kokay. It shows the amazing, long tongue.
Posted by Gerard Gorman at 11:38 1 comment: 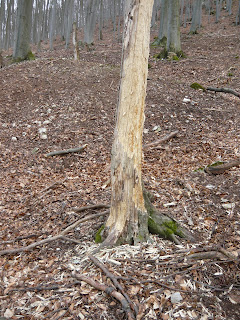 This tree has been stripped by Black Woodpecker Dryocopus martius. At first glance it may look like the work of White-backed Woodpecker Dendrocopos leucotos which works in a similar way on dead trees, however, the very large wood chips below the tree, the rather ragged nature of the stripped wood and the larger slashes on the tree (indicating the much larger bill of the larger species) all point to Black Woodpecker. Pilis Hills, Hungary, November 2009.
Posted by Gerard Gorman at 09:39 No comments: