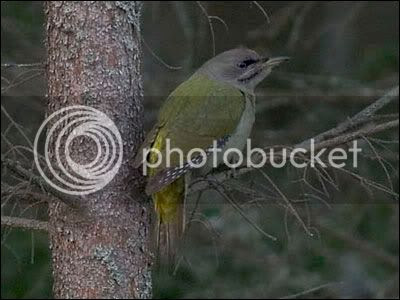 Adult female Grey-headed Woodpeckers look very much like males except that the red fore-crown is lacking. Rather, females show grey here with fine black flecks. The black malar stripe is also often narrower and shorter, and may not touch base of bill. Some females may have a few blackish or even red flecks on the fore-crown, but this is usually only visible on birds seen very well and closely. Overall females are a duller green than males. The bill is slightly shorter, too, but again this is almost impossible to discern unless both adults are seen side by side. Females are also slightly smaller than males. The photo on the left shows an adult female in Sweden in December 2005 (Göran Ekström). Note the lack of red.
Posted by Gerard Gorman: at 16:56