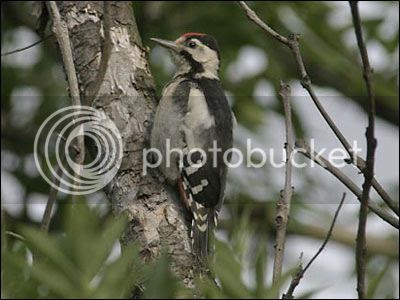 Juvenile Syrian Woodpeckers of both sexes can be easily separated from adults because they have all red crowns. Most also have a reddish breast band or gorget, or at least a hint of such a band, across the breast. This recalls races of Great Spotted from North Africa and some birds in Iberia. Eyes browner, not as deep red as adults. Juvenile Syrians are best separated from juvenile Great Spotted using some of the features mentioned above for adults, in particular more white on head and less on tail than in Great Spotted. Some juvenile Great Spotteds may have a little red or pink on the breast but this never forms a real band as in most Syrians. Juvenile Syrians typically show dark streaking on the flanks (recalling Middle Spotted rather than Great Spotted). Some may lack streaking. As with adult birds, the post-auricular stripe does not reach the nape in juveniles but beware juvenile Great Spotted here as some may also lack this stripe or at least part of it. Given the variability in face patterns the outer tail is perhaps the most reliable feature in safely separating juveniles of the two species. The photo above shows a juvenile female, taken in Austria, July 2004 (Göran Ekström).
Posted by Gerard Gorman: at 09:57