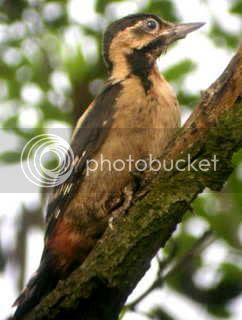 This young Syrian Woodpecker had just fledged. The photo was taken on Csepel Island, Budapest, Hungary in 2006 (Szabolcs Kókay). There does not seem to be any red on the crown of this bird, hence it is a female .A young male would show some red on the crown, even on a shot from this angle. Note also the dark smudge behind the eye, and a touch of red on the breast. The white areas are all rather dirty and scruffy, which is typical of juveniles.
Posted by Gerard Gorman: at 11:28