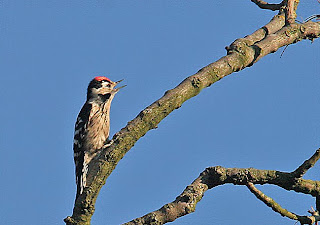 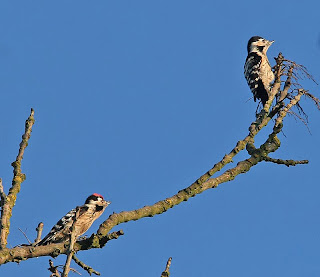 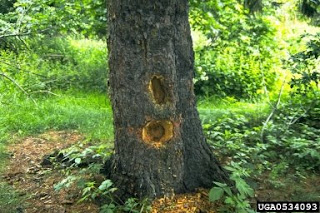 Another quiz woodpecker without the actual bird! Which woodpecker made these holes? What is the purpose of this work ? That is, just what is bird looking for ?
Posted by Gerard Gorman: at 07:56 6 comments:

Middle Spotted Woodpecker does not regularly drum. Females probably do not drum at all. Any drumming that is done by this species is rather mild, limited to early spring and usually made in response to competition from another male. Both adults do however tap loudly at the nest-hole in spring. This tapping is clearly a communicative signal and not part of hole excavation and is not drumming. Middle Spotted Woodpeckers seems to rely more on the meow-ing “song” when announcing territory rather than drumming. But it is important to state that this species does drum. Some observers have stated this it does not. Personally, I have seen this woodpecker drumming on a handful of occasions, the most recent being on April 3rd, 2008 in the Bukk Hills, Hungary.
Posted by Gerard Gorman: at 18:01 No comments: