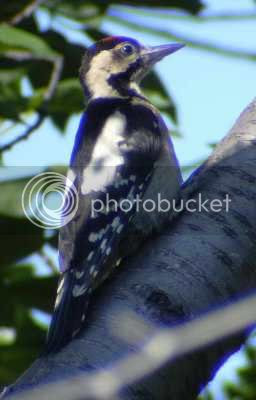 Juvenile female Syrian Woodpeckers have a smaller amount of red on the crown when compared to juvenile males. This photo of a juvenile was taken on Csepel Island, Budapest, Hungary in 2005 (Szabolcs Kókay). Note the small red patch of the crown which indicates a female. The dusky smudge around the eye is typical of all juveniles, but is variable. The lack of a post-auricular stripe and minimal white in the tail are features which separate from juvenile Great Spotted, as they also do in adults.
Posted by Gerard Gorman: at 10:05