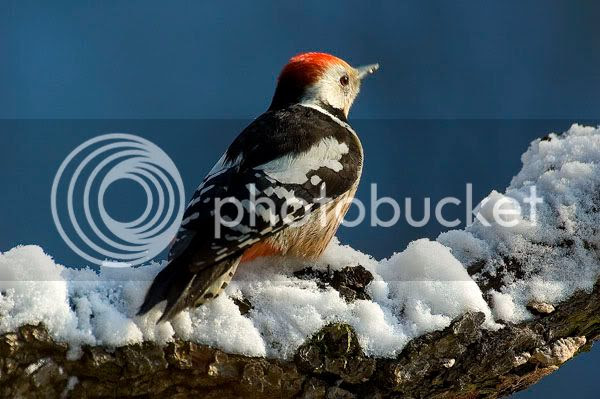 Measurements: Length 20-22 cm. Wingspan 33-34 cm. Despite its vernacular and scientific names Middle Spotted Woodpecker is not mid-way in size between its Dendrocopos relatives, the smaller Lesser Spotted and larger Great Spotted and Syrian. Middle Spotted is much closer to the two larger species in all measurements, being just 15% smaller, but is around 40% larger than Lesser Spotted. Middle Spotted differs from all its European relatives in being almost totally monomorphic, i.e. males and females are almost identical in appearance. Differences between the sexes will be dealt with in other posts in this blog. Both adults are essentially black and white although the white areas are rather dusky. Middle Spotted Woodpecker has less black on the face than other Dendrocopos species. Indeed, the cheeks, ear-coverts, forehead, chin, throat, neck and upper breast are all shades of off-white with a cream, buff or grey tinge. Lores and nasal tufts grey. There is only the suggestion of a malar stripe and on some birds it may be lacking altogether. Even when a malar is present it never starts from the lower mandible, but rather begins a little way short. In this respect it differs from all other European Dendrocopos species. The ear-coverts are creamy white, often rather dusky, and are crossed only partially by a black post-auricular stripe. The extent that the post-auricular stripe crosses the ear-coverts varies, but it never meets the black nape. However, on some views, particularly when birds are twisting their head during foraging, it may seem that the post-auricular stripe touches the nape. The iris is dark red, but usually appears black, and stands out as a dark bead in the otherwise pale face. An isolated black crescent-shaped area is formed below the cheek on the side of the neck where the base of the post-auricular stripe, whatever malar stripe there is and the shoulder stripe meet. The shoulder stripe runs by the side of the throat down to the upper sides of the breast where it merges into black streaks on the upper flank. The thin black line down back of neck linking the crown to the mantle recalls Syrian rather than Great Spotted as there are no post-auricular stripes joining it at the sides. The dark eye is clearly isolated in the white side of the face. Both adults have a red crown bordered by the white of the face. The lower breast, belly and flanks are essentially creamy white though this varies from dirty white to buff and there are often distinct yellowish tones on the flanks, belly and sometimes the breast. This yellowish wash may reach the leg feathering on some birds. The extent and strength of yellow is very variable. The lower belly, under-tail coverts and ventral area are flushed with pink. This pink spreads higher up the under-body than similar colouration does on other pied woodpeckers. It is also always paler than the red of the crown (recalling Syrian rather than Great Spotted). The flanks are heavily streaked with long black lines (recalling White-backed). The mantle, inner scapulars, back, rump and upper tail coverts are matt black. The outer scapulars are creamy white and form ovals, similar to but smaller than, those of Syrian and Great Spotted. The primaries and secondaries are black, heavily dotted and barred with white. Some of the rows of white spots on the flight feathers almost join to form bars. The upper wing-coverts are black and the inner median wing-coverts white with black bases. The greater coverts are black with white tips. The axillaries are dusky or dirty white. Most of the tail is black though the outer two rectrices are white dotted with 2 or 3 black bars (recalling Great Spotted rather than Syrian) whilst the third rectrix is sometimes edged white. The bill is visibly small and weak, mostly grey but with the lower mandible paler. The legs are grey. Males and females overlap in all measurements and features, but all size differences are rather subtle and slight and probably more related to feeding and foraging behaviour than to visual recognition. This photo of an adult male, showing most of the classic ID features, was taken in northern Hungary (László Nehézy).
Posted by Gerard Gorman: at 07:20