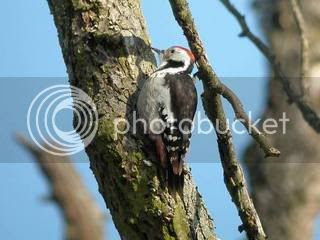 Female Middle Spotted Woodpeckers are very similar to males in plumage. They, too, have a red crown but it is not as bright as on males and does not extend as far back towards the nape. The red is also lighter, sometimes perhaps orange or rusty brown at the rear. The white forehead is often tinged yellow. But these features are generally difficult to judge in the field and may be so slight that they are unreliable, except on close-up views in the breeding season. On this photo of a female, taken at Kamond in Hungary (Gábor Vasuta), the red crown peters out at the rear and is rather dull. The flanks are not as well marked with black as on males, either.
Posted by Gerard Gorman: at 07:35