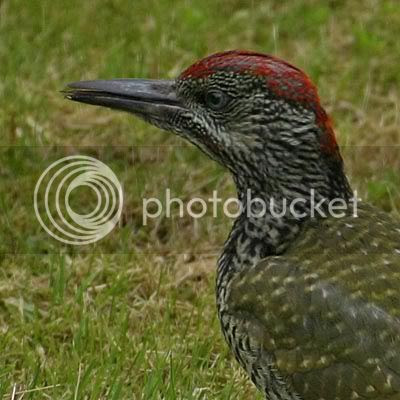 Juvenile Green Woodpeckers are very easily separated from adults until their first moult in the late summer-autumn. Heavy cream-white-beige spotting and barring covers the mantle, back, scapulars and wing-coverts. The coverts are sometimes so spotted that they appear almost all white and are also mottled with cream-white-grey speckles and with broken bars on the under-parts. Brownish bars cover the neck sides and ear-coverts. This scaly appearance is partly produced by dark sub-marginal lines on the feathers. Overall juveniles are a duller olive green, with heavy blackish streaking. The rump is a dull yellow, not as bright as on adult, and barred white. The red crown is heavily mottled with grey and white and the wings and tail barred grey-black. Tail feathers and primaries are more or less as adult. Bill dark grey with the base of the lower mandible often yellowish. Legs and feet dull olive. The iris is greyish-brownish whereas they are white or pinkish in adults. Juvenile males have a black-charcoal malar stripe which is weaker than on adult male, but contains some red feather tips. Juvenile females are as juvenile malea though they lack red feather tips in the rather faint black-grey malar stripe. The photo above shows a juvenile male, taken in Germany (Thomas Kradt). Note the touch of red in the rather weak malar stripe.
Posted by Gerard Gorman: at 11:59