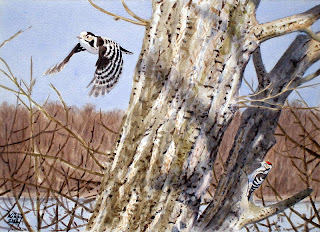 In an earlier post on this blog I highlighted the art of wildlife artist Szabolcs Kokay from Budapest, Hungary. In my opinion Szabolcs is one of the very best artists when it comes to capturing woodpeckers, whether it be in oils, watercolours or just pencil. This wonderful painting of a pair of Lesser Spotted Woodpeckers Dendrocopos minor in riverine habitat in Hungary, is yet another fine example of the artist's ability at capturing woodpeckers that are not only accurate plumage-wise but also shown in the correct habitat and behaviour context.
Posted by Gerard Gorman: at 18:00 No comments:

I recieved this method of detering woodpeckers (in this case a Green Woodpecker in the Buda Hills) from hammering and boring into wooden buildings. Hang balloons, left over from kids' parties etc, over the areas that are being visited by the birds. Apparently this ingenuous, yet simple, method immediately solved the problem for one family, as the woodpeckers stopped visiting and the occupants have slept soundly ever since. However, it remains to be seen for how long those balloons have to be left dangling there!
Posted by Gerard Gorman: at 13:28 No comments:

I sometimes am asked about "what to do" when woodpeckers start to "attack" timber houses, holiday homes, log cabins and the like. Besides the actual holes made and damage done the noise when the birds hammer (perhaps outside a bedroom) can also be a problem. Now this behaviour is actually quite common but it is desirable that the occupants and owners of such buildings try to tackle the problem in a woodpecker-friendly way. Shooting or harming these birds is not the answer and indeed in most countries would be illegal. A simple solution is to hang ribbons, lines of tape or aluminium strips over the areas being hacked into, so that the bird cannot get at those spots and to generally just deter the bird. Though it deals mainly with North Amercan woodpeckers the following website is worth browsing. The background and methods suggested to deter woodpeckers are mostly valid for European species: http://www.birds.cornell.edu/wp_about/
Posted by Gerard Gorman: at 12:33 No comments:

This Quiz Woodpecker is a little different from the previous 13 ... i.e. there is no bird! The question is which European woodpecker species made these holes ?
Posted by Gerard Gorman: at 17:52 1 comment: 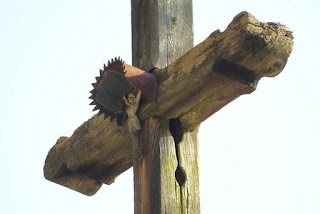 I think we can say that woodpeckers are not disliked as a group of birds by the average person. Some birds and bird families seem to be disliked by many people (for example, crows and brood parasites, even hawks) whilst others (for example, White Stork and swans) are held in regard or even "loved". I have no way of proving it but it seems to me that most people “like” or at least “do not mind” woodpeckers, On the other hand, in some parts of Europe woodpeckers are occasionally regarded as pests. In Scandinavia cabins and holiday homes are regularly “attacked” by Black Woodpeckers, which does not endear them to the owners. In Norway all woodpeckers have been legally protected since 1981, however individual Black and Green Woodpeckers can be culled in Norway if they are proved to be damaging man-made objects. It cannot be denied that Black Woodpeckers attack wooden man-made structures, for example, soon after the species populated the Danish island of Bornholm in the 1960s unhappy residents reported that Black Woodpeckers were boring holes in their houses. In the UK telecommunications companies have complained that they have had to replace wooden telephone poles because they have been riddled with holes by woodpeckers. Wooden tiled roofs of churches are also somes hacked into by woodpeckers. Other things woodpeckers do which brings them into conflict with man are: Green Woodpeckers boring into man-made bee-hives in search of larvae, Grey-headed Woodpeckers feeding on garden and allotment fruits, as already mentioned, several species bore holes in telegraph poles which obviously does not go down well with electricity suppliers, etc. In Sweden protective nets are placed around wooden power-lines poles to protect them from Black Woodpeckers. In recent decades some woodpeckers, particularly Syrian and Great Spotted, have moved into suburban areas across Europe and such "damage" has become more evident. But whatever damage woodpeckers inflict on humankind’s interests, it pales into insignificance when compared to what mankind has done, and still does, to woodpeckers. Above all the felling of natural forests, and management methods of existing and newly planted ones has decimated woodpeckers in some regions. Due to this Middle Spotted Woodpecker is extinct in Sweden, White-backed is all but extinct there and is declining badly in Finland. Middle Spotted Woodpecker finally vanished in Sweden when its habitat became fragmented by the onward surge of commercial forestry. In the UK, the obsession with "health and safety" means that rotting trees, and decaying boughs, are often removed, though these are prime woodpecker timber. The photo above of woodpecker holes in a wooden cross in Poland was taken by Romuald Mikusek.
Posted by Gerard Gorman: at 12:45 No comments: 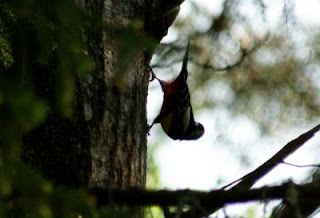 Can you decide which species this is ? Let's start with that !
Posted by Gerard Gorman: at 13:55 5 comments: