Holes: Black Woodpecker as a provider 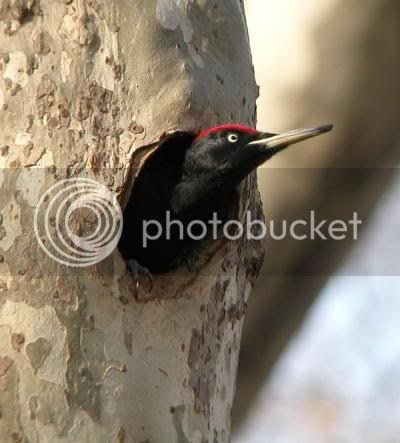 Almost all of Europe’s woodpeckers play a role in providing nest and roost sites for other wildlife. Woodpeckers are primary hole users, that is, they excavate their own holes. Species that do not make their own holes, but rather use those made by others, are known as secondary cavity users. Black Woodpecker is Europe's largest primary excavator. This species can be regarded as a very important species as a provider of tree holes for other animals This is quite simply because this is the only bird in Europe’s forests that can excavate large holes in sound trees. Many species, avian and others, that are unable to do bore into timber use these holes for breeding and roosting. In fact, the distribution and success of these species often depends upon the Black Woodpecker. Birds which commonly use old Black Woodpecker as nest-sites include Stock Dove, Jackdaw and Tengmalm's Owl, whilst mammals include Red Squirrel, Pine Marten and various bats. The photo here shows an adult male Black Woodpecker leaving its hole in a park in Budapest, Hungary (Gábor Vasuta). Note the oval rather than round shape of the entrance which is typical for this species.
Posted by Gerard Gorman: at 09:00