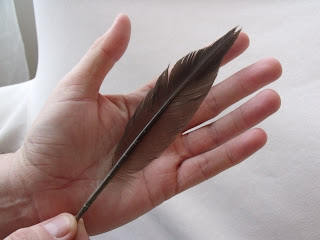 Central tail feather of a Black Woodpecker Dryocopos martius. Note how thick the rachis (shaft) is, though it cannot, of course, be judged from a photo, it is also rigid and strong. Found in the Buda Hills, Hungary.
Posted by Gerard Gorman at 16:56 No comments: 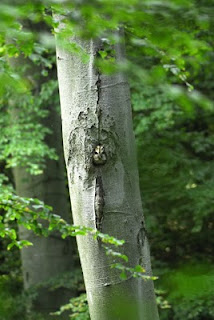 Tawny Owl Strix aluco in an old Black Woodpecker nest-hole in a beech tree. Black Woodpecker is a major provider of holes for secondary cavity-nesting birds. Photo taken in Hungary by Laszlo Becsy.
Posted by Gerard Gorman at 13:04 No comments: 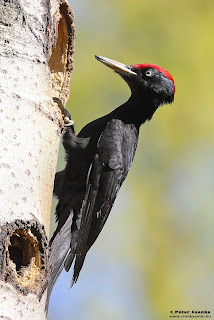 Peter Csonka, from Hungary, is another photographer whose work includes some great shots of European woodpeckers. This fine photo of a male Black Woodpecker Dryocopos martius was taken near Tata, Hungary. Take a look at more of his work: Peter Csonka
Posted by Gerard Gorman at 08:16 No comments: 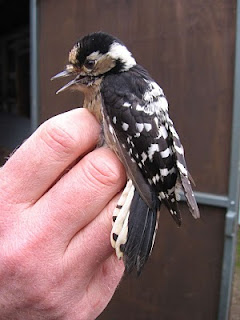 This adult female Lesser Spotted Woodpecker Dendrocopos minor was caught at Beale Park, near Reading, Berkshire, UK by the River Thames on the 6th February 2010 during a ringing session. The bird was found to already have a ring and when checked it was discovered to have been ringed at the same site in September 2003. For a small bird this seemed to be a very good age and it was later confirmed that this was the oldest know Lesser Spotted Woodpecker for the UK, at 6 years 4 months and 8 days. Thanks to Danny Alder for this snippet and to David Baker for the photograph.
Posted by Gerard Gorman at 10:40 2 comments:

A new site for all interested in woodpeckers is Picid Pics. It contains many great photos of wrynecks, piculets, woodpeckers and secondary-users of woodpecker cavities.
Posted by Gerard Gorman at 14:20 No comments: 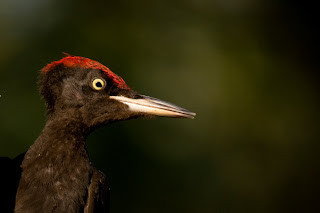 Hungarian Laszlo Nehezy is another photographer whose work includes great pictures of woodpeckers. This superb close-up shot of a male Black Woodpecker Dryocopos martius was taken in the Bukk Hills, Hungary.
Posted by Gerard Gorman at 17:19 No comments: