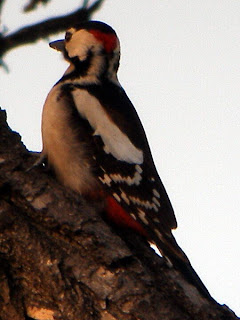 This photo taken recently by Szabolcs Kokay in Budapest, Hungary, shows a male Great Spotted Woodpecker Dendrocopos major with atypical head markings. It can be seen that the post-aurical stripes do not fully join at the nape, they are broken. This may suggest Syrian Woodpecker Dendrocopos syriacus or perhaps a hybrid bird. However, other features such as the red undertail coverts and strong beak indicate Great Spotted. The bird also apparently called like a Great Spotted and had considerable white on the outer tail feathers (though not really visable on this shot). Such birds often cause observers to claim a hybrid Great Spotted-Syrian, however such atypical features are not uncommon on Great Spotted Woodpeckers and I believe that this bird is simply an atypical specimen. Whether the bird has some Syrian influences, that is, a back-cross resultant from previous hybridizations, cannot be determined.
Posted by Gerard Gorman at 09:00