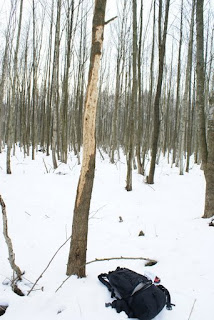 In winter woodpecker feeding sites are often easier to locate than in other seasons. Not in the least because of the lack of foliage on trees, but also because wood chips and other debris is easier to spot on snow-covered ground. This photo shows a typical winter feeding site of White backed Woodpecker Dendrocopos leucotos. A thin, rotting tree has been worked extensively to expose the wintering quarters of wood-boring beetles and other invertebrates. The tree is worked carefully and systematically for days, being shaving and chiselled rather than bored deeply into or hacked apart. The rucksack at the base of the tree gives an indication of how slim the tree is. This photo was taken by Romuald Mikusek in the Biebrza National Park, north-east Poland.
Posted by Gerard Gorman: at 20:12 No comments:

This photo is of a Black Woodpecker feeding site in a parkland on the edge of Budapest (taken by Szabolcs Kokay). In winter Black Woodpeckers (and indeed most woodpeckers) will rove locally to search for foraging sites. That is, they will feed in areas where they do not breed, or even visit, in the breeding season. Note the size of the wood chips on the ground beneath the tree. In Europe, only Black Woodpeckers leave debris of this size after hacking into timber.
Posted by Gerard Gorman: at 19:47 1 comment: 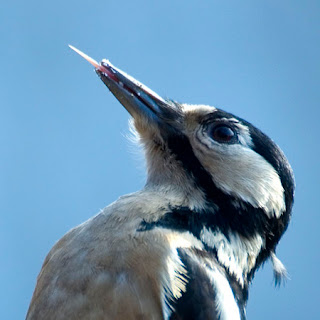 Woodpeckers have extensible tongues. In some species they are even prehensile. There are two basic types of woodpecker tongue: those with pointed tips and those with blunt, rounded tips. Pointed tongues are used to impale prey, rounded tongues are covered in a sticky substance and are used to lap up prey. We might say the first feeding method uses a spear, the second a gluey lasso. Tongues are also barbed but this varies between species. As a rule the more arboreal species (such as the Dendrocopos species) have more barbs on their tongues than the more terrestrial species (Picus species). Tongue length varies between species, too, and is also related to feeding methods. Species that specialise in eating ants tend to have longer tongues than those that feed on wood-dwelling beetles. In Europe the two Picus species, Green and Grey-headed (Grey-faced) Woodpeckers have the longest tongues. These long tongues are retracted and stored (in a loop) in a cavity around the skull and fixed near the nostril or eye-socket. This fantastic photo of a Great Spotted Woodpecker, with tongue protruding, was taken in Hungary by Laszlo Nehezy.
Posted by Gerard Gorman: at 10:59 1 comment: