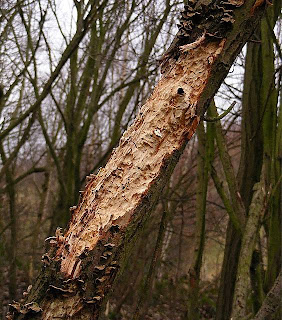 The UK newspaper The Guardian ran this interesting story on November 4th, 2008.

"While others tried to build a better computer or teapot or mousetrap, Julian FV Vincent, Mehmet Necip Sahinkaya and W O'Shea of the department of mechanical engineering at the University of Bath tried to build a better hammer. Unlike most previous hammer smiths, they studied woodpeckers. Why? Because to mechanical engineers, when they are in a certain frame of mind, a woodpecker is nature's finest version of a hammer. The trio published a study called A Woodpecker Hammer in the scholarly journal Proceedings of the Institution of Mechanical Engineers, Part C, Journal of Mechanical Engineering Science.

There they begin with a nod to the Ig Nobel prize-winning research of Dr Ivan Schwab, of the University of California Davis School of Medicine, who in 2002 wrote a monograph that explains why woodpeckers don't get headaches. Schwab was fascinated by the mechanical properties of the woodpecker's head - especially why its brain doesn't homogenise during all that pummelling, and why its eyes don't pop out of their sockets. The Bath scientists take a more holistic approach. They explore how the bird's entire body, from head to toes, feathers included, effectively function as a simple mechanical tool for pounding wood.

Vincent, Sahinkaya and O'Shea examined a green woodpecker (Picus viridis) that was in the terminal state known as "road kill". They measured the remains using old-fashioned methods and also with x-ray equipment, thus determining the values for several parameters: head mass, body mass and the relative lengths of the parts. Using these, and also video of a living, pecking woodpecker of similar size, the scientists estimated the bird's head inertia, body inertia, neck stiffness, neck damping and body spring stiffness. They wrote equations to describe a woodpecker's motions as it moves through all phases of the drum-drum-drum-on-wood cycle. To keep the mathematics fairly simple, there were a few engineering simplifications. The woodpecker's vertebrae and neck tendons together behave as a spring. The tree is, essentially, a stiff spring with a damper.

The study proudly proclaims an intended payoff from this research: "One of the reasons for studying the woodpecker was to derive a design for a lightweight hammer. It was reasoned that the woodpecker is a bird, therefore has to fly and therefore is constructed as light as possible. The mechanism, which has emerged as a result of the model reported here - momentum transfer from body to head of the woodpecker - has been used in the design of a novel hammer [in which a] rotating crank is connected by means of a rod to the casing, so that the motor plus its mounting oscillates about a central pin."

Vincent, Sahinkaya and O'Shea say their original intent was to use this hammer in space exploration, "where it has no net inertia until it comes in contact with an object". But its first use, they confide, probably will be in dentistry."

Posted by Gerard Gorman at 07:44 No comments: 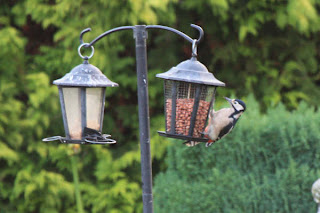 Here is a photo of one of the Great Spotted Woodpeckers Dendrocopos major that turned up in Ireland last year (see previous post for background). Thanks to Gerry O'Neill.
Posted by Gerard Gorman at 09:37 No comments:

Some years ago I was invited to visit Ireland as part of a feasibilty study for the possible reintroduction of Great Spotted Woodpecker Dendrocopos major. The project then became embroiled in politics but recently there have been developments. Here is an up-date from Conor Kelleher of the IWT:

"The IWT has been monitoring the recent sightings of great spotted woodpecker in Ireland with interest. Since 2005 the species has been seen in the east of the island in Cos. Antrim, Down, Dublin, Louth, Meath and Wicklow. These records began with single sightings but observations have increased and 2008 has resulted in unprecedented records. To date this year, twenty three sightings of great spotted woodpecker have been reported in the east of Ireland and these have included juvenile birds and behaviour such as courtship flight displays by adults and drumming by males. As well as these records, two birds were noted on off shore islands in spring providing evidence of movement of the species from Britain and/or mainland Europe. The occurrence of the species in spring and summer in Ireland and in increasing numbers over the last few years is a new and welcome development as the bird previously only occurred as individuals in the winter season. In addition, this year’s observations of both courtship displays and juvenile birds indicate that breeding may have taken place in Ireland for the first time in many centuries. As breeding of the species has potentially occurred, the IWT is suspending the present reintroduction plans to allow nature to take its course and will be monitoring the success of the species over the coming seasons. Although only a few juveniles have been seen and their fate is unknown at present, the IWT believes that it would be unethical to interfere with a successful natural re-colonisation of the island by the species if that is what is occurring. The appearance of the great spotted woodpecker so soon after the IWT proposed a reintroduction is surprising. It would appear that the recent upsurge in numbers of the woodpecker in Ireland and at the ‘right’ season to breed is a much welcome and delightful coincidence. There has been an obvious, glaring ecological niche to be filled in our woodlands due to the absence of woodpeckers since the loss of these birds centuries ago and, although the evidence for the great spotted woodpecker as a past Irish resident is scant, it does exist and there are Gaelic names and descriptions of the bird in historical literature. However, one of the most important pieces of evidence to be discovered was the bones of the great spotted woodpecker in a cave in County Clare. This is proof of predation on a local species as the right femurs of two great spotted woodpeckers were found and these were recently dated to the Bronze Age. The future expansion of the species would appear to be a given".

Posted by Gerard Gorman at 07:55 No comments: 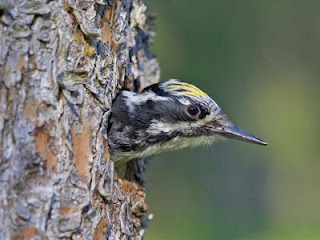 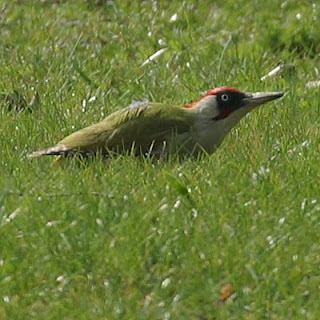 Adult male Green Woodpecker Picus viridis. Photo taken in Germany by Thomas Kraft.
Note the red in the malar stripe. The bird is in an alert, defensive pose.
Posted by Gerard Gorman at 12:45 No comments: 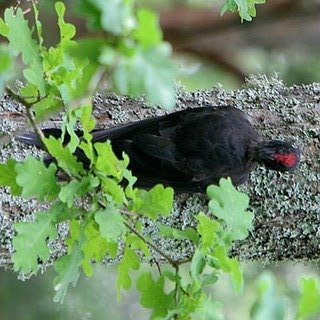 Adult female Black Woodpecker Dryocopus martius. Taken in Germany by Thomas Kraft. On this rear view note the reduced size of the red on the crown; males have all red crowns.
Posted by Gerard Gorman at 08:38 No comments: 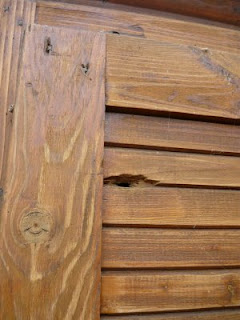 Here in this photo is another example of a hole made by a Great Spotted Woodpecker in a building. This time in a wooden window shutter in an adjacent building to the house in the previous photo (below) at Lake Balaton in Hungary.
Posted by Gerard Gorman at 15:23 No comments: 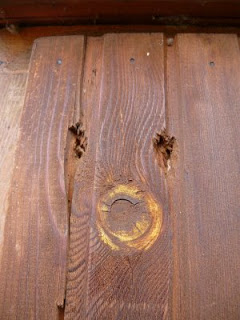 In this photo holes made by a Great Spotted Woodpecker in a wooden door can be seen. It is not totally clear why the birds hack into such buildings when most (including this house by Lake Balaton in Hungary) are not infested with insects. Perhaps woodpeckers bore into such surfaces because they are deceived into thinking that insects are inside by the sounds made by electricity cables ?

Posted by Gerard Gorman at 11:31 No comments: